Clips from the event.  More footage on the way will be added into this page as they upload.
Juniors, Pros, Women, U 23...

Highlights from the race

Highlights from the race

Pro Men before and near start

pre-race with JB and Todd and a few race clips

JB after the race and a few clips

pre-race interview on the start line

post-race interview with women's single speed national champion.
Posted by Big Johnston at 11:37 AM No comments: 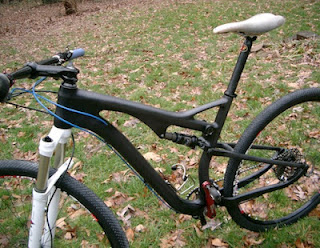 Their business practices are shady, their English worse, but they almost own manufacturing in the World.  Already making bicycle parts for name brand cycling companies, now these factories have turned their expertise to making their own in-house bicycle parts for much less money.

These parts have all the technology behind them as workers already make parts for their high-end customers.    What is lacking is all the media hype and research and development seen in brands you already know. 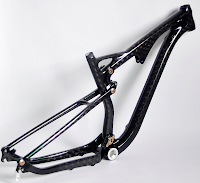 The above bike frame is a near replica of a Scott Spark, their high-end full carbon race bike. The geometry is identical, but they take design tips from other brands and incorporate them, such as the "handle" at the seat tube/top tube junction seen on many Specialized bikes.

This bike was purchased from a China seller.  The main difference is in the price as the ride and weights are near identical to their near-cousin name brand versions.

Already this test frame has been put through the paces on some of the southeast's most demanding trails and has put smiles on the riders faces.  The frames are offered in 29 and 27.5 inch wheeled versions as well as hard tails.

In a time where carbon bicycle components and frames are seeing sky-rocketing prices riders still want to protect their wallets.  The name-brand frames are not US made; the money goes over seas anyway, but these cheap alternatives are cutting out the middle man and giving the bike shops a source of reasonably priced bicycles.

I call it BMV because the ride is so sweet you will want it to be your Valentine too.

Update:  I have well over 7,000 miles on this frame and with no issues.  I have serviced the pivot bearings once, and the ones lower on the frame needed it, as is common to all frames.
My only complaint was in the initial build I could only arrange the front derailleur high enough to fit a 38 tooth ring, but this is no longer an issue with 1x11.
I have just replaced the chain stay portion with a new thru-axle chain stay, and this has stiffened up the rear end a little.
Update II: I rode this for 3 years, racing and riding, but retired it when I got a new bike.  The parts have been swapped over to a 120 travel frame of the same factory and that one has 10,000 miles on it from all over the country and still going.

The cable routing is wrong.  When will frame makers realize that the cables from the right side of the bar route around the left side of the frame, and the ones on left to the right?  This also has the rear brake as an internal routing through the frame and the derailleurs external.  I do not route the brake internally because that requires disconnecting the hose and finding new parts to re-connect. Instead I routed one of the derailleur cables through, and this is not the smoothest of routing lines, but works just fine.  I then attach the brake hose externally where the shifter housing went.  It works, but smart riders have been routing cables smoothly around the other side for over 20 years now.  Come on guys….

Pennsylvania's uniqueness consist of very technically challenging terrain, mostly lots of cabbage-sized rocks sprinkled on the trailed. Locals know this as just a trail, visitors see an impossible series of obstacles that they must learn to navigate before they can race.

The real story is the athletes, as Todd Wells of Specialized puts it, "the same riders always seem to surface to the top no matter what the course is like".  Todd was the favorite going into this event, but a very technical course would have favored Jeremiah Bishop of Sho-Air/Cannondale.  The location and technical, very technical, nature of the trails seemed to give Bishop an obvious advantage, but the governing body of road cycling had the race course re-surfaced to bring it in line with the average western-style course.  Bishop was hoping for rain to come in and make a mess of the course to favor his east coast style riding, but his rain dance efforts were of no use as the rain did come, but the dry course absorbed it overnight.  In the end it was the 90 degree heat and high humidity that played the protagonist.

During the 6-lap race both Bishop and Wells traded off the lead as they distanced themselves from the pack.  Not too far behind were a group containing Mike Broderick, riding a great race, but who flatted out to 8th near the end.

Todd Wells, who is a former national champion, looked like he had command of the race with a healthy lead of near a minute over challenger Bishop.  The humidity was working on the fast charging lead riders though; Todd was suffering and Bishop was suffering.  Their charge off the front at the start was catching up with them.  Meanwhile, back in the main group of followers, StephEttinger had been pacing himself well.  By the 4th lap Steven was close enough to see the dust trails and would soon be sitting in Bishop's then Todd's draft.  That order would not last long before Steven passed and dropped everyone and looked comfortable doing it.
en
Steven had hoped for a good finish, so a win was not totally unexpected, but he was ecstatic in the light of his celebrity competitors. 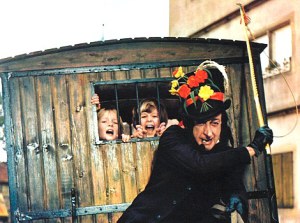 What's become of our sport? For years and years usac, the governing body of cycling, has neglected the sport of mountain biking.  At Nationals usac typically treats the 12 and under racers as incapable of riding trails.  It may seem like a minor issue, but is a big deal for those parents and kids involved.

The young kids ride the adult race course lap all season so are used to whatever trail conditions are present, and are more than capable of managing any course their adult counterparts can handle.

The purpose of a National Championship is to crown the best of the best.  It is a time when the top racers from across the nation converge, and for juniors might be the only event all the top racers in their category are together.

Every year, without fail, usac advertises the juniors event as it should be run, but changes everything entirely one or two days before the event.  They change it for the worse.  They say it is for safety reasons or that the course is too hard or too long for anyone of these young ages.  They hear from first-time racers present that complain, but hear nothing from able racers who ride and are fine with the original course.  This is not a place for first-time racers or those unable to complete a normal lap.  The laps were advertised and the distances were set.

usac hosted a "riders meeting" two days before the kids races.  They announced the course changes and explained there were safety concerns about "kids being out there for hours".  In short, all their reasons were bogus and kids and parents at the meeting voiced their anger, outrage and complaints.  Many of those who spoke out against the "dumbing-down" of the race course received rounds of applause.

One particular 14 year old girl who traveled quite a distance explained that she had trained for this event, purchased expensive equipment for this event, and had been practicing on the original course all week.  Almost in tears she asked why she, a very capable and talented rider, was expected to race through the grass and around some cones at the National
Championship.  The usac official conducting the meeting, err press release, explained that that was the decision handed down and was final.

The highest level of junior racing, Cat I 15-18, was not forgotten about.  Per their own rules the junior races should last between 60 and 75 minutes.  All reports indicated that the top juniors would be doing about an 18 minute lap.   Usac decided for them to do 3 laps, breaking their own guidelines giving the racers a race less than 60 minutes when a 4 lap race would put them right at the normal finish time as the sport has always seen.

The usac official continued to insist this is what is in the best interest of the racers and that there is nothing she could do.  She would take these concerns back to the board.  The angry crowd requested that the board attend the meeting.  The board meets in "secret" and will not bother to attend the meeting.  People started to get the feeling that usac felt they were almighty, but it was clear that usac's opinions did not reflect the racing publics expectations.

In the end some changes were made to return the course to something more resembling the original advertised route, but people were soured on usac and only satisfied on a mediocre level.

Usac was unwilling to admit mistakes.  Perhaps the only mistake they will admit to is offering a public forum for people to voice their concerns. We will see if there is ever another meeting, or if the meetings are changed to "announcements" in the future.

Even after the races, when mistakes were found, usac was unwilling to admit there could be mistakes.  They stand their ground and announce they are flawless, without error and that their systems could never allow a mistake.

Attendees walk away from their National Championship disgusted, but trying to find the good experiences they had rather than let the dirty underbelly of usac ruin their enjoyment of a sport they love so much.

Mid-week there was a internet radio talk show aired.  In it issues with usac of another topic were raised.  Quite a bit of insight was revealed about the problems with usac.  The radio show left hope that things will change very soon.

Mountain biking is a great sport and there are many, many great people with big hearts and a passion for the sport that are doing great things.  This sport thrives despite usac.
Posted by Big Johnston at 8:47 AM No comments: